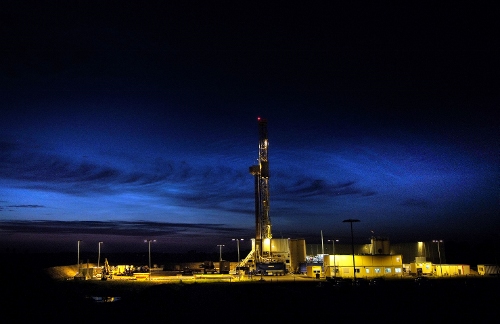 The importance of gas storage plants is growing

Solid as a rock: The importance of gas storage plants is growing. Facilities require resistant valves.

Renewables are all the trend in some European countries. Depending on the weather, however, they can be real drama queens. To prevent bottlenecks, grids are increasingly being fed with electricity produced by gas. As such, gas storage is becoming an important issue. For they can also store excess energy, and feed it back in when consumption rises. In unstable times, such storage facilities are as solid as a rock.

It is indisputable that demand for natural gas is rising in Europe – especially during transition phase away from nuclear power and CO2-intensive forms of energy. According to the Arbeitsgemeinschaft Energiebilanzen (AG Energiebilanzen, Working Group on Energy Balances) natural gas consumption in Germany, for example, had a share of 20.9 percent in the total energy mix, by 2016 it had risen to 22.6 percent. With a growth of 9.5 percent, gas belongs to the big winners in primary energy consumption, while renewables came in second with 2.8 percent.

Gas supply is an important topic in nearly the whole of Europe. “In the future, the European Union will have to import more and more natural gas to meet demand in the home market. Therefore demand for additional natural gas tank farms is growing,” explain the companies Astora and EWE, project partners of the Jemgum natural gas storage cavern.

Gas storage will play a central role in securing the energy system transformation project, “as it is the only way to chemically store excess energy from renewables – wind and sun – in the form of hydrogen or green methane and secure the fluctuating balance,” states Maurice Walter, head of sales and services, Hartmann Valves. Or, in other words: if the wind isn’t blowing and the sun isn’t shining, gas compensates the power fluctuations of renewables. “Storage ensures stable levels of availability and flexible usability of the energy source,” emphasises Astora.

The German storage facility Wolfersberg makes an important contribution. In summertime, excess gas imports are stored in the storage facility located in Upper Bavaria, and in wintertime it is fed into the gas grid. Wolfersberg has a maximum storage capacity of 140,000 Nm³/h, a maximum withdrawal capacity of 240.000 Nm³/h and a working gas capacity of 365.000.000 Nm³. Capacities, that actively supply energy to the metropolis Munich.

However, old shut-off valves had to be replaced in the natural gas storage facility Wolfersberg, which had been put into operation in 1973. In order to ensure an extremely high level of safety and maximal availability, Hartmann Valves developed highly compact twin ball valves, which are not only extremely gas-tight, but also solved the problem of limited space. They fulfil an important duty for the facility: “We must be able to isolate every part of the plant which needs to be repaired or maintained. Two shut-off valves with the possibility to bleed off pressure in between serve as isolation. Thus, we ensure 100% that no gas enters the area concerned,” states operations manager Markus Schuster, DEA.

No problems for renewing isolation section

Most of the Hartmann ball valves installed are single ball valves. As safety requirements were especially high, 40 twin ball valves were installed. They offer a double barrier and two distinctly independent isolating mechanisms in one body. The easy to install, zero-bubble-tight system provides twice the level of safety, and it saves space, as the company states.

An extra compact special design of the twin ball valve was developed when an old isolation section in the main injection line had to be renewed. It consisted of a welded and flanged ball valve. Exchanging the welded valve would have resulted in a long downtime. Hartmann Valves therefore engineered a twin ball valve DN 250 PN 250 version, with the same length of the original standard valve. After a successful trial period, further compact twin ball valves sharing the same dimension were also installed in the gas drying facility. The extreme shortening of the twin ball valve system was highly beneficial.

A further custom valve was made for the suction lines. Even the

shortest TBVs were too long. Hartmann solved this problem by using a double piston system, providing two barriers in one valve. The system incorporates two seals in flow direction: one on the upstream, the other one on the downstream side. As such, it fulfils a two-barrier requirement, including a bleed-off in between.

Today, a total of 800 ball valves made by Hartmann Valves are installed, in the plant’s various facilities. Ten wells are operated here, as well as natural gas compression, pressure reduction, drying and temperature control facilities. With a depth of 2,900 to 3,000 meters, the depleted gas reservoir is the deepest gas storage facility in the whole of Europe.

The Wolfersberg plant is one of the older, yet still well-functioning gas stores. Growing demand for gas, however, means more storage plants are needed. Jemgum serves as a recent example, in 2013 gas filling of the storage facility commenced. In the next couple of years, EWE and Astora plan to construct 33 caverns in the Jemgum salt dome. EWE plans to build 15 caverns with a volume of up to 700,000 cubic meters each, Astora will realise 18 caverns with a geometric volume of up to 750,000 cubic meters.

“The marketable working gas volume is approximately 4,1 TWh. The injection rate is 2.3 GW (= 55 GWh/day), and the withdrawal rate is 2.875 GW (= 69 GWh/day),” reports Ralf Riekenberg, above-ground project manager and department head at the Jemgum gas storage plant. The natural gas stored in Jemgum is to be provided mainly to the German and North-West European market.

Jemgum was chosen thanks to its subterranean salt domes, which are especially well suited to store natural gas. The caverns being constructed are giant cavities in the salt domes, which are formed by leaching, using water. Deep under the surface the gas is safely stored in the salt formations. Salt walls have an advantage: they seal-off especially well. “Caverns are especially suited for the fast injection and withdrawal of natural gas. Demand fluctuations due to the time of day can be compensated optimally,” declare project partners EWE and Astora.

Valves make sure everything runs smoothly at the Jemgum storage plant. “They are used for pressure control, pressure protection and transmission control,” explains project manager Riekenberg. Valves are mainly made from steel, and “in most cases exposed to high pressures and pressure differentials”. The pressure range lies between 40 and 170 bar, the temperature range between -20 and 150 °C, and the flow rate between 20,000 m³/h and 250,000 m³/h. Valves installed in the gas storage plant are exposed to glycole, which is used to dry the gas, and water, which, in turn, is used to pre-heat the gas. These create challenges the safety, control and shut-off valves have to overcome.

Up to 150,000 m³ of natural gas can be withdrawn from a cavern per hour. Before withdrawal, the gas pressure needs to be reduced to the pipeline pressure level. “This cools the gas so much that it has to be pre-heated,” state the Jemgum operators. Gas can be stored up to several months in a cavern. During storage, the natural gas comes into contact with the cavern floor, which emits water vapour. The gas is subjected to a dehydration process, making sure no condensation occurs in the pipelines.

Gas storage plants pose a challenge for components: high flow rates occur when opening and closing shut-off valves. Contaminations carried along in the media hit the seal area of the valve at extreme speeds. Soft-sealing systems are quickly damaged, and become leaky. “A pure metallic sealing system makes valves more robust, and as such more reliable and durable,” states Maurice Walter, head of sales and service at Hartmann Valves. The metallic seal between ball and seat ring is more resistant than soft-sealing systems – especially if media is contaminated.

Failure-free availability is important, and the seal needs to remain safe for several years. The valves therefore not only need to be gas-tight and reliable, but also low-maintenance and durable, adds Walter. These aspects need to be considered when selecting the proper combination of materials, in order to ensure a gas-tightness over a long period of time.

Hartmann Valves supplied the Jemgum gas plant with DN 200 and DN 600 ball valves. The brine pipeline line was supplied with ball valves with nominal diameters DN 500 and DN 900. Deployment in the Jemgum brine plant and pipeline placed particularly high demands on the valves, as the saturated salt solution causes a great degree of corrosive stress. To ensure a maximal service life, the Hartmann tailor-made valves received an internal plastic coating, in addition to the pure metallic sealing system.

The ball valves in the nominal diameters DN 200, 250, 300 and 400 for the gas plant have an innovative throttling function. The main gas line can thus be opened at full differential pressure. The ball valve is used for controlled pressurisation during throttling, afterwards the entire pipeline cross section is available. This simplifies operation, doing away with the need for complex bypass lines.

The increasing use of renewables makes further storage capacities necessary. Ten years after being put into operation, the Haidach natural gas storage facility in Austria will receive a further connection line to increase the level of integration with the German energy market. The planned pipeline in the region Burghausen/Überackern will use the MONACO natural gas pipeline to connect the storage facility with the German pipeline network. “Since the capacities of the transport network that is already connected are at full capacity utilization, the additional connection line is an important investment in a needs-based natural gas supply in South Germany,” explains Astora GmbH & Co. KG, a subsidiary of the Wingas Group.

The additional transmission capacities for depositing and withdrawing natural gas in the Haidach facility will be available from the beginning of 2020, announced Astora. The shareholders of the Haidach storage facility, one of the largest in Central Europe, will invest a total of approximately seven million euro.

The VNG gas storage facility in Bad Lauchstädt, Saxony-Anhalt, is also expanding. By 2017, a further cavern with a planned working gas volume of 65 million m³ will be developed.

In 2017, the first four caverns of the “Katharina” underground storage facility in the federal state of Saxony-Anhalt commenced operation. Eight more caverns are set to follow. Storage capacity will be 600 million cubic meters for the project, Gazprom and the Leipziger Verbundnetz Gas are investing 400 million euro. A German valve manufacturer will make a total 770 ball valves for the new facility, as well as 15 isolation sections: the total volume is a stately four million euro.

At the current moment, the German storage facilities can store 24 billion cubic meters of natural gas, covering around a quarter of Germany’s annual consumption. Capacities, however, are also being auctioned to Dutch and French dealers. Demand is on the rise, and valve manufacturers can profit. From November 27 to 29, 2018 the world`s No 1 Fair for valves will present its innovations at Valve World Expo in Düsseldorf accompanied by the Valve World Conference.

MEDICA 2018: The Starting Block for Many Start-Ups ProWein World makes appearance in India with launch of ProWein Education Campaign