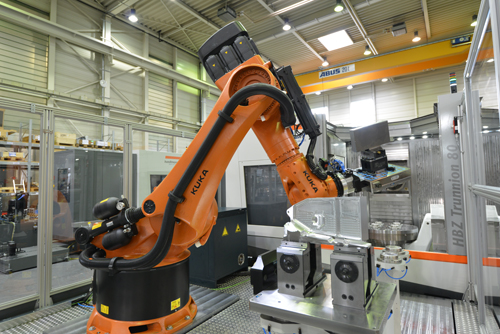 Frankfurt am Main, 4 August 2016. – Industry 4.0 is on everyone’s lips, but practical implementation is still rather tentative. This is due not least to the lack of standards for linking the digital machines to each other. The VDW (German Machine Tool Builders’ Association) in Frankfurt am Main is now engaged in changing this. It has for the first time formulated a comprehensive and nonetheless flexibly applicable standard with which robots or other workpiece carrier systems can be integrated more simply into a production system. This standard is scheduled for submission to the responsible technical committee of the International Organization of Standardization (ISO) in the upcoming weeks. “We are thus launching a first globally valid standard for interfaces in automated production systems,” says a gratified Dr. Hartmuth Müller, Chairman of the VDW’s “Machine Tool – Automation Interface” Working Group, which has drawn up the standard.

It was only recently that the WGP (German Academic Society for Production Engineering) – a grouping of front-ranking German professors in this field – warned the small and mid-tier companies not to miss out on the revolution involved in digitised value creation chains made possible by Industry 4.0. The lack of standards for networking production lines, let alone entire production chains, is deplored not only by academics. “The firms often have to endure protracted struggles before their machines are able to communicate with each other in an automated production chain,” concurs Ralf Reines, a technical consultant at the VDW. The problem is this: “Machines are not going to understand each other if the interfaces concerned are not compatible because they have not been standardised, just as people cannot talk to each other if they don’t speak the same language.” Depending on the manufacturer concerned, signals like “Release the workpiece” and “Place the workpiece in the loading station” have different names, and the meanings behind them are not uniformly defined. This is why, for example, a robot cannot necessarily “agree” with the processing machine involved on how to load and then process the workpieces.

Costly and elaborate reprogramming not required

Sizeable production lines are in most cases installed without being able to test beforehand whether the machines are actually able to communicate with each other via the various interfaces provided. The individual machines involved are frequently too large and complex to be transported into a test environment. For this reason, the individual interfaces (i.e. the connections via which the data from the various machines are exchanged with each other) are discussed and coordinated beforehand by system integrators on the basis of numerous documents. Then comes the great moment when the line is switched on – and only too often nothing works. The amount of time and money expended on reprogramming the interfaces can be avoided – if all interfaces conform to a standard right from the start – as laid down in the new standard. “This will impart significant momentum to digitisation of production operations, and is an important step forward on the path to Industry 4.0,” says Hartmuth Müller confidently.

The newly created standard can be applied on a modularised basis, in order to meet a huge spectrum of disparate requirements – wherever particular workpieces have to be moved from transporting machines to processing machines. This may involve simple removal of a product’s parts or complete complex production lines, e.g. in an automotive production facility, where the workpieces are processed at different machines. In all, users can choose between three stages and different options for interpreting the standards to suit the specific project involved. Certain control system signals can be added or omitted, e.g. depending on whether the processing machine possesses a loading door guarding the machining area or not. The most important safety-engineering-related aspects are also laid down in a special safety interface.

In order to guarantee simplicity in actual use, the experts at the VDW have described the standard in an Excel file, with which the signals can be easily filtered for the various stages and options involved.

The formal procedure at the ISO begins with a survey on whether the standardisation project is of international importance. For this to apply, at least four countries have to regard the project as deserving of standardisation. Should this be the case, the work involved in international standardisation will be commenced. The experts are in no doubt that this will happen before the end of this year.

Number of characters including blanks: 4,858

The German machine tool industry ranks among the five largest specialist groupings in the mechanical engineering sector. It provides production technology for metalworking applications in all branches of industry, and makes a crucial contribution towards innovation and enhanced productivity in the industrial sector as a whole. Due to its absolutely key role for industrial production, its development is an important indicator for the economic dynamism of the industrial sector as such. In 2015, with around 68,500 employees (annual average for 2015, firms with more than 50 staff), the sector produced machines and services worth around 15.1 billion euros.

The VDW has formulated a flexibly applicable standard with which robots or other workpiece carrier systems can be simply integrated into a production system.

If interfaces are not compatible, robots and machines will not be able to communicate on what to do next.

You will find texts and pictures on the internet under www.vdw.de in the Press Service section. You can also visit the VDW through our social media channels: