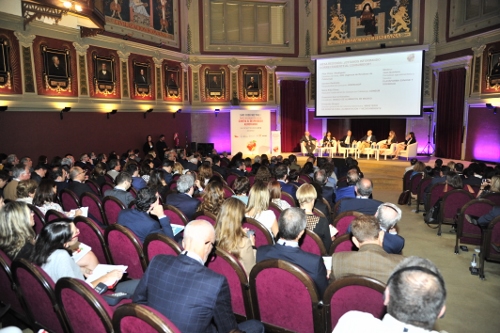 The second SAVE FOOD Meeting on 26 September at the Ateneo de Madrid enjoyed a particular privilege: Her majesty Queen Letizia of Spain attended the event jointly held by the SAVE FOOD Initiative, the Spanish Exporters’ and Investors’ Club, as well as the Spanish Commercial Coding Society AECOC/GS1. The monarch serves as a Special Envoy of the Food and Agricultural Organisation of the United Nations (FAO). The high-calibre speakers representing political, business, retail circles and NGOs shed some light on the different facets of this set of subjects revolving around food waste and losses during the 1-day meeting. After the extremely successful first SAVE FOOD meeting at Nestlé in Vevey in Switzerland last year, the second edition of the event now followed on 26 September at the Ateneo de Madrid in Spain and was again received very well by all parties involved. “The SAVE FOOD Meeting 2016 was a resounding success. The visit Her Majesty Queen Letizia of Spain paid to us was a special honour and illustrates the importance of the issue of food losses and waste,” said Werner Matthias Dornscheidt, President & CEO Messe Düsseldorf, taking stock of the meeting.In the non-interpack year 2016 the SAVE FOOD Meeting also served as a meeting point for the by now over 140 industry partners and several hundreds of NGOs and research institutes registered in the SAVE FOOD Network at the FAO.The meeting kicked off with an official welcome by Isabel García Tejerina, the Spanish Minister of Agriculture, Nutrition and Environment, Balbino Prieto, President of the Spanish Exporters’ and Investors’ Club,and Werner Matthias Dornscheidt, President & CEO of Messe Düsseldorf, as well as Marcela Villareal, Director Office for Partnerships, Advocacy and Capacity Development of the FAO.

In the following lectures Mireia Barba, the Project Manager at the socially committed company Espigoladors, as well as Jesús González, Director of PepsiCo’s plant in Burgos, individually explained their approaches to avoid food waste. Christian Traumann, CEO at Multivac, analysed the role of packaging in the battle against food waste. And retail, represented by Artur Molinero Sanchez, Director of HR and External Relations at Carrefour Spain, and Alejandro Martinez Berriochoa, CSR Direktor at Eroski, also elucidated their approaches.

Vincent Giz, Deputy Director for Food Policy of the relevant directorate general of the French Ministry of Agriculture and Forestry, explained his  political stance and analysed the effects produced by the law recently passed in France that obliges supermarkets to conclude agreements with food banks on any foodstuffs not sold.

The centre-piece of the SAVE FOOD meeting was a panel discussion on the question whether consumers are sufficiently informed about food waste. Panellists here included the Director General of Industria Alimentaria, Fernando Burgaz, the Director of the Catalonian Waste Authority, Pilar Chiva, the representative in charge of the Hispacoop consumer organisation, Carmen Redondo, the person responsible for institutional relations in the field of consumption in Catalonia, Núria Riba, and the President of the Madrid food bank, Francisco García González.
They discussed the difference between “best-before” and “expiration dates”, the general appreciation of food and its responsible consumption. Queen Letizia took part in the subsequent Q&A session.  During the lunch break of the meeting participants were invited to regain their strengths at the “Leftover Cuisine Cocktail Lunch” with saved foods. This lunch was organised by retail association Grupo IFA.
Also forming part of the SAVE FOOD Meetings 2016 was the interactive SAVE FOOD Exhibition. Alongside a detailed illustration of the magnitude of international food losses and waste it also featured an overview of the various projects of the SAVE FOOD Initiative as well as information on the involvement of individual member companies and associations. Next year the third international SAVE FOOD Congress will be held on 4 May, the first day of interpack 2017 at the Düsseldorf Exhibition Centre.