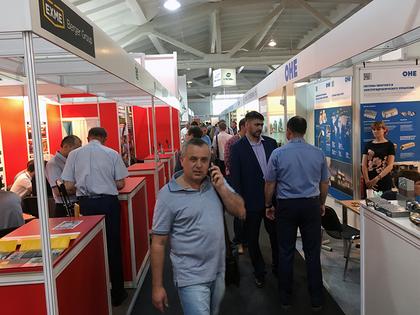 A positive mood prevailed at the Kuzbass Fair Exhibition Center: the trade fairs UGOL ROSSII & MINING, the International Trade Fair for Coal Mining Technology, Preparation and Materials Handling, NEDRA ROSII, the International Trade Fair for Exploitation, Processing and Refining of Metals and Industrial Minerals, and SAFETY & HEALTH closed with a marked increase in visitor attendance. Over 32,500 international trade visitors gathered information here on the entire cross-section of innovations in mining technology from 6 to 9 June 2017. This corresponds to a 13% increase in visitor attendance over the previous event.

To the tune of 600 exhibitors from 24 countries presented product innovations, services and technical processes on over 40,000 square metres of exhibition space. In addition to the strong Russian participation and many international companies, joint pavilions from China, the United Kingdom, Poland as well as the Czech Republic were represented in Novokuznetsk.

The positive verdict of Jane Isaacs, Director General of ABMEC (Association of British Mining Equipment) read: “A good place to meet old and new customers, friends – colleagues. The visitors were influential and of good quality.”

Erhard Wienkamp, Executive Director at Messe Düsseldorf GmbH, also sees the trade fair results with satisfaction: “The organiser Messe Düsseldorf, Messe Düsseldorf Moscow and our longstanding local partner Kuzbass Fair are very satisfied with how the event went. Russian business is picking up again. Our exhibitors have reported very positive discussions at their stands over the past few days of the trade fair.”

The Kemerovo region and the city of Novokuznetsk extend a cordial welcome to investors. They can benefit from regional aid measures and political support. One of the industry leaders, the Liebherr company, for example, used the duration of the trade fair to open a repair and warehousing complex with workshop near Belovo. The new repair centre – already the third centre of its kind in Russia – is designed to guarantee sustainable after-sales services for all the Liebherr construction machines employed in the Kemerovo region.

UGOL ROSSII & MINING has long been considered a leading trade fair for the sector in Russia. Held in parallel with NEDRA ROSII and SAFETY & HEALTH it gives trade visitors such as mine operators, mining engineers, exploration experts and geo-scientists true added value.

Themed days as well as an extensive line-up of accompanying events including workshops, seminars and international conferences rounded off the ranges on display. Trade fairs and side events provided an ideal platform for networking among scientists, politicians and industry representatives on both the exhibitors’ and visitors’ side.

Also meeting with plenty of interest was the Forum organised by VDMA (Verband Deutscher Maschinen- und Anlagenbau e.V.). During the “German-Russian Dialogue” aspects of Russia’s current economic situation were discussed and mechanical engineering innovations from Germany were introduced for Russian mines. The principal theme was the future of the German-Russian partnership in mining. With 35 companies Germany accounted for the highest number of international exhibitors.

Monika Bind (VDMA Mining) summarised the importance of the Russian trade fair trio for the German market as follows: “Across all sectors there is no other trade fair held in Russia outside of Moscow with so many participating German companies.”

The next UGOL ROSSII & MINING, NEDRA ROSSII and SAFETY & HEALTH will be held at the Novokuznetsk exhibition centre from 5 to 8 June 2018.

Press photos for the trade fair and the opening event are available upon demand.

Upon publication we would appreciate a reference copy!

Таmilla Nastullaeva of ООО Weir Minerals: “This is the second time our company has participated at UGOL ROSII & MINING. We can say with conviction that we have achieved the most important objectives we set ourselves considering the result after four days at the trade fair. These goals included positioning the company and its products on the market, communication with the customers we have already cooperated with in Siberia for a long time and making contacts with new potential customers. The number of exhibitors, the visitors’ profile as well as the good organisation make this trade fair doubtlessly the most important event for the coal industry.”

Sandvik Mining and Rock Technology: “UGOL ROSII & MINING is a key element for the industry on the federal level, both in terms of the size of the event and of its professional organisation. The trade fair is an excellent platform for strengthening partnerships and business relations. It is a great professional platform for entering into and building partnerships. Sandvik Mining and Rock Technology has taken part in the trade fair for more than ten years now and exhibits the latest development in mining machines. Handing over new plants to our esteemed customers as part of the trade fair has become a good tradition by now. This year we handed over the Sandvik H410 machine to JSC Еvroruda and the gig series Sandvik BR2577 to Hydrohammer. Four technical units were on show at the stand: Sandvik DL331 and Sandvik DE140 as well as a wide array of drilling tools. We are convinced that the deployment of Sandvik’s new systems in mining operations will not only increase safety and efficiency in raw material exploration but also create new jobs. Modern and reliable technology are an investment in the economic development of the region.”