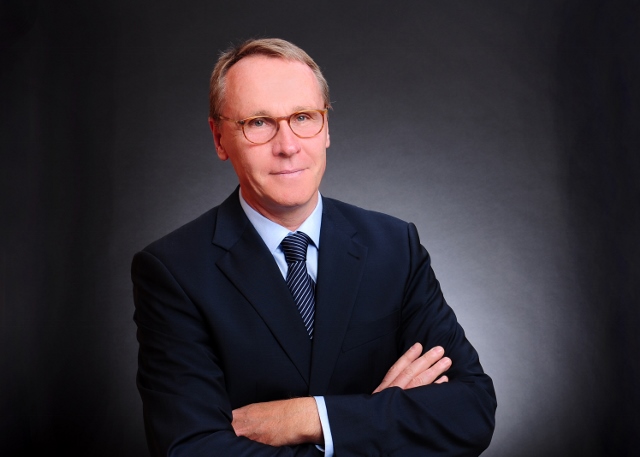 Messe Düsseldorf to increase proportion of Indian customers in Düsseldorf

1 September 2015 sees Thomas Schlitt (54) take over management at Messe Düsseldorf India Pvt. Ltd. in New Delhi. Here he is succeeding Udo Schuertzmann who left the company at the start of the year.

“Thomas Schlitt has occupied a management role in the international business for the last 15 years, initially at Messe München and later at Nürnberg Messe,” explains Werner M. Dornscheidt, CEO at Messe Düsseldorf GmbH. “With him on board we are excellently geared up for the positive growth on the Indian market.” This means the Messe Düsseldorf Group – represented with an office in Mumbai since 1982 and organising its own trade fairs in the country alongside the incoming business since 1990 – is now reacting to changes that can open up new opportunities for the sub-continent after years of economic stagnation for domestic and foreign companies.

The change in government in India last year visibly brightened the mood in the country’s economy and the government is planning a series of measures facilitating moderate growth. The 2015/2016 economic plan includes a reduction in corporation tax, the cutting of red tape, for instance by simplifying formalities for company foundation, and the development of infrastructure. “These measures are very popular in the Indian economy,” says Thomas Schlitt. “What’s more, they also open up good market opportunities for companies operating internationally.” With its own events in the country Messe Düsseldorf plans to pick up on and actively support the positive turn in India’s economic development. Commenting on this Schlitt said: “To achieve the set goals the Indian economy will have to rely on technology imports from countries like Germany, Japan, Italy of the USA. Especially in the fields of medical device technology, packaging and mechanical engineering there are considerable lags here prompting corresponding government targets.” The Messe Düsseldorf Group plans to pick up on these with its core sectors.

Messe Düsseldorf is currently active on the Indian market with eight events. In the medical sector and in wire and cable (MEDICAL FAIR INDIA plus wire&cable INDIA and TUBE INDIA INTERNATIONAL respectively) the Messe Düsseldorf Group already now holds the leading event on the sub-continent while the packaging theme (International Pack Tech INDIA), metal processing (Metallurgy India) and glass (GLASSPEX INDIA) are also excellently placed. With Messe Essen the corporate group is also collaborating on a welding and cutting trade fair (INDIA ESSEN WELDING & CUTTING) which complements the content of its trade fairs in the metal processing sector. October 2014 saw the holding of the first INTERNATIONAL THERMPROCESS SUMMIT ASIA in Mumbai. With the growing share of renewable energy in the country’s power generation the issue of storing energy is becoming ever more relevant in India. With the addition of Energy Storage India the Messe Düsseldorf Group now holds a conference trade fair on the future of the technology and the sector on the five most important markets of the world for renewable energy. “We plan to improve the quality of our current trade fairs on the ground and also extend the portfolio,” explains Schlitt.

“By deepening our commitment on the Indian market we also wish to increase the proportion of exhibitors and visitors from the sub-continent to trade fairs in Düsseldorf,” adds Dornscheidt and thereby slots the appointment of the new Managing Director into the “MD 2030” corporate strategy of developing worldwide sales activities. Previously, Schlitt was Director of International Sales and Business Development in the international department at Messe Nürnberg. His responsibilities there included international sales management and the examination of trade fair themes on the company’s target markets. For this reason, Dornscheidt stresses that Thomas Schlitt is also Messe Düsseldorf’s first choice when it comes to its incoming business. Last year India ranked eighth among the international visitor nations while in terms of exhibitors it was 13th. “Even though these figures are not representative given the very different trade fair cycles of the events held in Düsseldorf, this does show that there is still scope here,” explains Schlitt. The high number of exhibitors at trade fairs in Düsseldorf clearly shows the extent of business interest in leading global trade fairs in Düsseldorf and the potential they hold for Messe Düsseldorf. The trade fairs encountering the most interest in 2014 were the investment goods fairs interpack, wire & Tube and MEDICA while on the trade visitor front EuroShop and glasstec plus Valve World Expo were able to post the most interest.