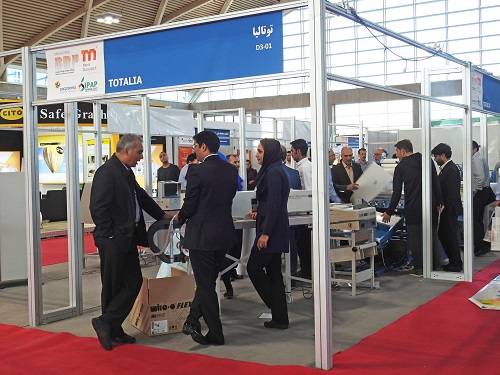 The debut of the combined trade fairs IPAP Printing & Packaging Expo – powered by drupa and pacprocess Tehran, as part of the interpack alliance, has markedly exceeded both exhibitors’ and visitors’ expectations and also prompted satisfied faces among the organisers Messe Düsseldorf and Barsaz Rooydad Pars Company (BRP). Some 7,500 experts were attracted to Iran’s most state-of-the-art exhibition centre Shahr-e-Aftab (Exhibiran International) from 12 to 15 October, where 167 exhibitors from 11 countries presented their products and services. The ranges included exhibits from the entire value chain of the packaging industry and related process industries (pacprocess) as well as printing technologies from the areas of Prepress/Print, Premedia/Multichannel, Postpress, Converting and Packaging, Materials, Equipment, Services and Infrastructure (IPAP). The trade fairs occupied 14,575 square metres of total exhibition space. Exhibitors included national companies such as Vana Press, Shargh Sanat and Kooshesh Karan Machinery as well as international enterprises like Canon Middle East, Di Mauro, and Project Engineering. Commenting on this Hamed Irani, Director BRP, said: “The importance of the print and packaging industries cannot be rated high enough. They lay the foundation for the competitiveness of a wide variety of products and are closely tied to rising export revenue. The trade fair concept of pacprocess Tehran and IPAP went down very well and has created the pre-requisites for a positive development in these key industries.”

“We are delighted that the debut of IPAP was so successful. This way we have created a sound basis for the trade fair allowing it to grow and gain in international appeal,” says Sabine Geldermann, Global Head of Printing Technologies at Messe Düsseldorf, commenting on the good trade fair results and goes on to say: “The Iranian market offers enormous growth potential and we are confident that with IPAP we are giving our exhibitors and visitors an outstanding platform to tap into this promising market. We will also support the trade fair with our expertise in future – in line with the motto ‘IPAP 2018 powered by drupa’!“

Exhibitors like Ayman Aly, Senior Marketing Manager at Canon Middle East also rated their participation as very positive:  “The idea of the event is quite good. To conclude, IPAP is very much needed on this market because the printing market is lagging here. The market needs opening up and there is a lack of business structure, especially in the printing industry. Developing this country and this market will be very important. The quality of the visitors was good and this is a good base for next year. We achieved our objectives and are very excited about coming back next year – probably with larger space. Our wish for next year is to have more competitors at the event as this would attract more visitors.”

Iran is regarded as an extremely attractive market for the industry. With more than 32,000 offset printshops, some 50,000 digital printing service providers and roughly 65,000 other upstream suppliers to the print industry, it boasts attractive potential for further business developments – especially since the international sanctions were eased in early 2016. And the economy faces backlog demand in all areas: A well educated, relatively young population of over 80 million people increasingly calls for high-quality packaged products that it is not possible to produce to a competitive standard using local companies’ existing, obsolete technology. This puts great pressure on local producers to invest. This means big opportunities especially for European investors and partners as these are highly appreciated by Iranians.

The coming edition of IPAP and pacprocess Tehran is scheduled for early October 2018 on the trade fair calendar. For further information go to www.drupa-global.de and/or www.pacprocess-tehran.de.