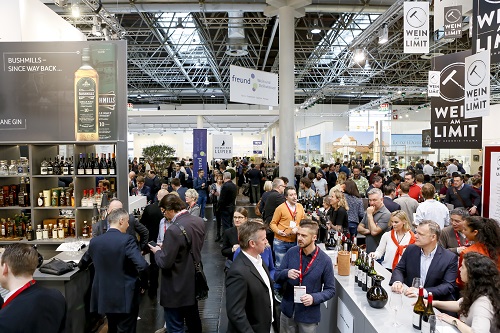 Excellent Level of Orders at ProWein

• New record visitor and exhibitor numbers
• High ordering activity among decision-makers
• Premiere of the ProWein Business Report
• Pop star Sting adds glamour
Once again this year ProWein impressively proved it is the world’s most important business platform for the international wine and spirits sector. Over 6,500 exhibitors from more than 60 nations – more than ever before – were presented at ProWein in Düsseldorf from 19 to 21 March.

In focus were the new wines from all relevant winegrowing regions of this world supplemented by 300 spirits specialities. Probably the most famous exhibitor was Sting with his Il Palagio winery from Tuscany. The superstar could not resist the opportunity to come to ProWein in person and present his wines with his wife Trudie Styler.

This year visitor numbers also set new standards. A total of 58,500 trade visitors from 130 countries came to ProWein (2016: 55,700 from 126 countries). One in two visitors came to Düsseldorf from abroad. Particularly pleasing here was the high number of managers: at least two-thirds of all visitors were top decision-makers. They came to Düsseldorf with a clear intention to invest: just under 60% of all trade visitors performed their business deals during the fair or planned to place orders right after it. One in two visitors also found new suppliers. “ProWein is an incredibly intensive trade fair. For three days very concentrated and effective business goes on here. Visitors particularly included key players – important importers and representatives from large international commercial chains. Again this year the sector showed how strong and capable it is. An extremely high number of orders were placed and a great deal of new business ideas were discussed,” said Hans Werner Reinhard, Managing Director of Messe Düsseldorf, summing up the success of the trade fair.

Exhibitors’ comprehensive ranges this year were supplemented by special focal points. These included the Champagne Lounge, the Organic World focusing on organic wines, the Tasting Area by Mundus Vini and the fizzz Lounge. Particularly quirky and unusual ideas were in the spotlight in the “SAME but different” special show. Running in parallel the supporting programme consisted of some 500 tastings and events that were held either right at the exhibitors’ stands or in the ProWein Forum. These events were aimed at retailers and restaurants to an equal extent and provided key impulses and information. Amongst other things British wine critic Jancis Robinson presented her own personal ProWein favourites.

Almost 1,500 experts from the wine sector from 46 countries were polled on international wine markets, marketing trends and the development of wine sales channels. The report takes the current temperature of the sector and in future is to serve as an annual barometer of trends. Those polled included wine producers (small and large wineries, cooperatives) as well as marketers (speciality retailers/wine merchants, wholesalers, importers/exporters, hotels and gastronomy). The combination of different perspectives of the producers on the one hand and the marketers on the other constitutes a unique barometer of opinions for the sector.

ProWein World
After ProWein in Düsseldorf has ended with such success our minds now turn to Asia. 8 to 11 April will see ProWine Asia kick off with its first edition in Hong Kong after its successful debut in April 2016 in Singapore.

ProWine Asia that alternates between Hong Kong and Singapore is ProWein’s second foreign fair alongside ProWine China in Shanghai. “The sensational final result of ProWein 2017 in Düsseldorf gives us another considerable boost for our satellite events in China and Asia. This once again underlines what we stand for: for professionalism and concentrated business,” said Marius Berlemann, Global Head Wine & Spirits and Director of ProWein.