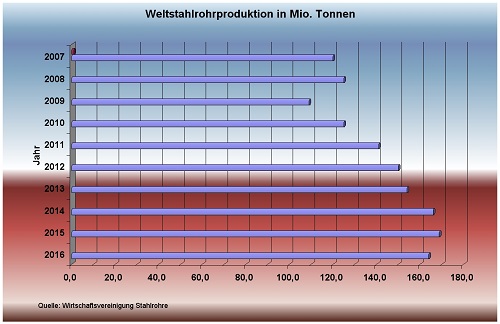 With the exception of the crisis year 2009 global steel pipe production has only developed in one direction over the past ten years: upwards. This trend seems to have stopped for the time being. After only marginal growth in 2015, last year saw the output go down by 3% to 164 million tons worldwide, according to data by the “Wirtschaftsvereinigung Stahlrohre e. V.” in Düsseldorf. The reason for this dip was the markedly lower steel pipe production in North America, the CIS and China against the previous year. European steel pipe producers did significantly better. Across the EU steel pipe producers managed to increase their output by 4% to 14 million tons. In Germany output even rose as much as 5% over the previous year to 2.6 million tons.

The worldwide decrease in production is mainly attributable to the lower quantities of seamless steel pipes and welded large-diameter pipes with an outer diameter exceeding 16” (corresponding to 406 millimetres). In contrast to this, steel pipe producers on a global scale manufactured approximately the same amount of welded steel pipes with an outer diameter of up to 16” in 2016 as in 2015. Whereas the EU producers succeeded in slightly increasing output in this segment for the third consecutive time, output in the USA lagged significantly behind the previous year’s figures.

The Association sees the energy industry’s sustained reticence to invest as the reason for the decrease in output observed for seamless steel pipes in all regions of the world. The drop against the previous year was particularly pronounced in the USA with 20%. Compared to this, output of EU producers was only 5% lower than in 2015. Producers of large-diameter pipes posted an 8% decline worldwide. Particularly affected in this segment were the plants in North America and the CIS, while EU producers succeeded in increasing their production by 6% after a very weak previous year.

China’s constantly growing dominance on the steel pipe market is hard to overlook. The global record output of 168.8 million tons in 2015 can therefore be attributed exclusively to the 11% production increase posted by Chinese manufacturers. With this, China’s share in global steel pipe production rose to 58%. This increase resulted especially from the marked increase in the production of “small” welded steel pipes with an outer diameter of up to 406 mm in the People’s Republic. It is true that EU producers were also able to expand their production in this market segment. Global large diameter pipe production also went up in 2015 although not only production increases in China contributed to this growth but also increases in the CIS and the USA.

2015 proved a particularly bad year for fracking companies in North America, many of which had to discontinue production by association accounts. The reason for this were the falling crude oil prices which even dropped below the values in the crisis year 2008 towards the end of the year. Due to the crude oil oversupply on world markets the energy industry largely stopped investing. The fact that natural gas prices also continued to drop did not help upstream suppliers in this situation – their sales dropped by over 50% in part.

Salzgitter AG, whose pipe operations were renamed “Business Unit Mannesmann” in early August 2016, also felt a slightly negative trend in global steel pipe production for the first time in years. By company accounts its customers’ demand is driven by the mega trends “Water”, “Energy” and “Mobility”. On the global steel pipe market producers were therefore faced with multiple challenges over the first nine months of 2016. They mention the sudden drop in demand on the energy industry’s part in past years, although this clientele still represents some 50% of global steel pipe production. On the other hand, sustained surplus capacities especially in the Far East put an additional burden on the industry’s earning power.

Big Demand from the Construction and Automotive Industries

A positive trend in the companies’ view were the raw materials prices which consolidated on a low level on world markets. The prices for crude oil, which fluctuated between US$ 40 and 50 per barrel in the third quarter, caused exploration activities to at least stabilise. The Rig Count (an indicator for the number of new oil and gas wells to be commissioned) in North America continued to go up slightly – but a noticeable counter movement for the massive investment slump in the energy sector is not on the horizon yet. In contrast to this, the classic sectors of industry continued to show robust demand. According to Salzgitter demand was particularly high in the construction and automotive sectors. Even the large-diameter pipe business was better from the German perspective than in the very weak previous years.

The order intake of the Europipe Group, for example, is substantially higher than over the first nine months of the previous year. The reason being above all orders for new pipeline projects such as the Nord Stream Pipeline 2, TAP Offshore and Zohr Field. In addition to this, delays in completing the pipeline project in the Black Sea (called South Stream formerly) made for better filled order books.

In 2016 Salzgitter’s order intake also improved for HFI-welded pipes against the period under review. Over the first nine months of 2016 this company even posted double the order intake for spiral-seam welded large-diameter pipes compared with the same period of the previous year. Here most demand was generated in Germany due to the realisation of long planned projects, followed by Poland, the Netherlands and Italy. The high-precision pipe market in turn benefited from the filled order books of export-focused German premium automotive manufacturers whereas the situation in the industrial and energy sector continued to be tight. Weak demand was also posted in the stainless steel sector. By company accounts, the relatively high order volumes of the power plant sector failed to compensate for the weak demand from fields that are directly or indirectly related to oil and gas.

“Forecasts are difficult especially when they refer to the future,” Danish physicist Niels Bohr is said to have stated – or was it Mark Twain, Karl Valentin, Winston Churchill or Kurt Tucholsky? Anyway – at present forecasts on the development of the economic situation are subject to a particularly high degree of insecurity against the backdrop of the current political and economic environment. This is why the company’s future-related statements are subject to a moderate cyclical recovery on the principal markets – a fact not carved in stone in view of Trump, Brexit and so forth.

Salzgitter forecasts heterogeneous developments for its own companies in the business unit Mannesmann: Positive – also due to the orders received last year – by the large-diameter pipe plants and also by the high-precision plants thanks to automotive manufacturer’s sustained demand. In contrast to this, the order situation on the North American market has impaired, they find. The Segments of medium-sized pipes, high-precision and stainless steel pipes, in turn should see some at least hesitant recovery.

According to estimates of the “Wirtschaftsvereinigung Stahlrohre”, the outlook for the steel pipe industry have improved again in the meantime. They say that “the investment activities of the energy sector, which had practically reached a complete standstill after the crude oil price collapse in 2015 are starting to return to normal.” In addition to the resulting backlog demand, the cyclical upswing in raw material and steel prices should be benefiting the sector just as much as the continued robust economic situation in industrialised countries. Playing an important role here are the relatively favourable energy prices, the expansive fiscal policy and the favourable Euro-Dollar exchange rate. On top of this, the Association expects North America’s foreseeably more expansive economic policy and energy policy with a stronger focus on fossil energy carriers to produce positive effects for the steel pipe industry.

All types of steel pipes as well as plants and machines to produce and finish pipes are a central theme at “Tube 2016”. This also holds true for the next edition of the leading international pipe trade fair, which will as always be held together with the world’s biggest wire and cable trade fair “wire”. The next trade fairs “Tube” and “wire” will be held from 16 to 20 April 2018 at the Düsseldorf exhibition centre.