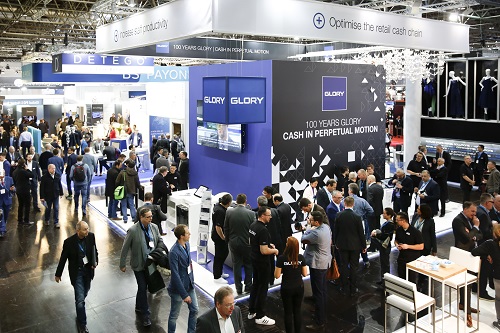 EuroCIS 2018 has impressively confirmed its position as the Leading Trade Fair for Retail Technology. Over the three trade fair days from 28 February to 1 March as many visitors from Germany and abroad as ever attended the trade fair in Düsseldorf (12,000 compared to 10,253 in 2016). This means that EuroCIS posts clear increases in all aspects, because the number of exhibitors with 470 companies from 29 countries and the exhibition area occupied of 13,400 m² also markedly exceeded the previous event’s values (2016: 411/ 10,767).

“We are very pleased to note that EuroCIS managed to continue its success story,” said a highly satisfied Hans Werner Reinhard, Managing Director at Messe Düsseldorf, who went on to say: “Especially over the past ten years or so EuroCIS has developed into what is the leading trade fair for retail technology in Europe. The current dynamic developments in technology both in physical and e-Commerce and retailers’ resulting investment provide us with tailwinds for EuroCIS.”

Reinhard particularly underscores the growing international attendance: “Especially positive to note is the marked increase in the number of trade visitors from outside of Germany. One in two trade visitors travelled to Düsseldorf from abroad.” The trade audience came from 89 countries. The top countries of origin after Germany were the Netherlands, the United Kingdom, Russia and Italy.

Alongside “perennial topics” such as check-out systems or POS soft and hardware, for example, new themes also dominated EuroCIS 2018. These included first and foremost, solutions in the area of the Internet of Things, Augmented Reality and Virtual Reality. Subjects such as robotics and Artificial Intelligence were omnipresent at EuroCIS.

“EuroCIS 2018 has illustrated very clearly that information technology has undeniably become a decisive success factor for retail. It enables innovative business models and opens up new opportunities for targeting shoppers,” says Michael Gerling, General Manager of EHI Retail Institute. Gerling highlights that all departments of retail companies are affected by dramatic changes in structure and processes, which is reflected by the visitors’ profile at this trade fair. “EuroCIS is increasingly becoming a trade fair that is visited not only by IT and security technology decision-makers. Employees responsible for marketing and distribution, for expansion and store design or for sourcing and logistics are also increasingly using EuroCIS to prepare investment decisions.”

Meeting with great approval was the Start-Up Hub celebrating its premiere at this year’s EuroCIS. 12 newcomers provided evidence here that they are exactly the ones who can breathe new life into the retail technology world. They presented how you can scan and pay for goods by App leaving the store without any check-out operation; how you can create an individual body profile and calculate the ideal clothing size with practically any smartphone, or how an in-store analytics solution measures in real time how shoppers move in the store and which products they interact with.

The extra features offered of EuroCIS 2018 were also used in full. 2018. The EuroCIS Forum and the Omnichannel Forum were very well attended on all three days. With case studies and user reports presented in German and English the two forums proved of direct practical relevance. On top of this, the Guided Innovation Tours of EuroCIS were all fully booked.

Further news and stories related to EuroCIS 2018 are provided by the live coverage at the EuroCIS Portal: https://www.euroshop.de/eurocis_live_2